By Walter Finch For Mailonline

Alexandria Ocasio-Cortez nearly attacked a right-wing troll who was sexually harassing her on the steps of the Capitol after he crowed that she was his ‘favorite big booty Latina.’

Notorious instigator Alex Stein, 35, was waiting at the steps of the Capitol building on Wednesday to film the Democrat Representative from New York, catcalling her and remarking that she ‘wanted to kill babies but she’s still beautiful.’

The congresswoman was approaching the steps with an aide as police stood by during the exchange.

‘I love you, AOC, you’re my favorite!’ he called. ‘You look very beautiful in that dress.’

He caught the 32-year-old’s attention when he made a lewd comment about her body and she changed course to approach him.

The aide physically placed a hand on her chest to hold her back from doing something unwise.

Instead, Ocasio-Cortez posed for an ironic selfie and flashed the peace sign and walked on up the steps. 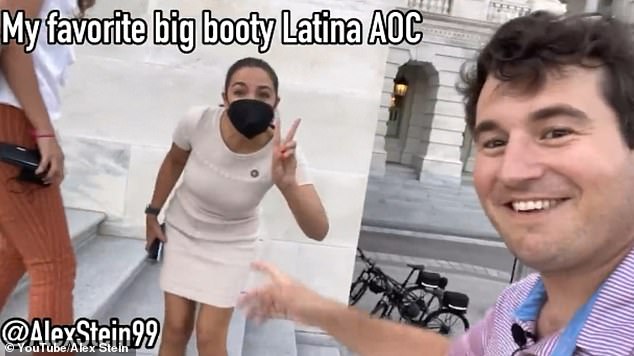 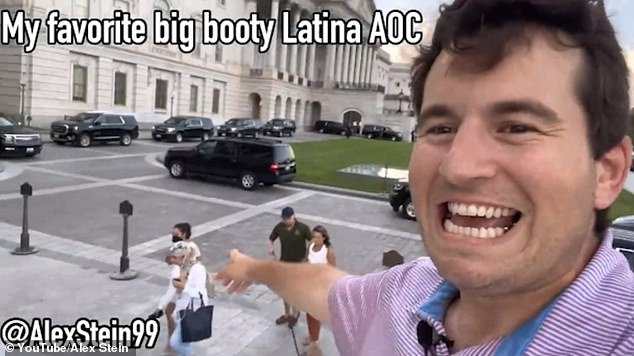 ‘I love you, AOC, you’re my favorite!’ Stein called as she approached. ‘You look very beautiful in that dress’ 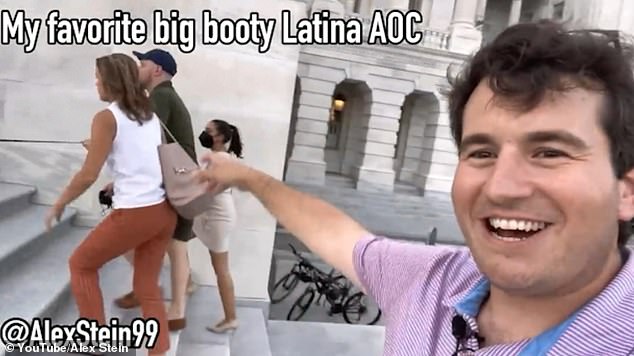 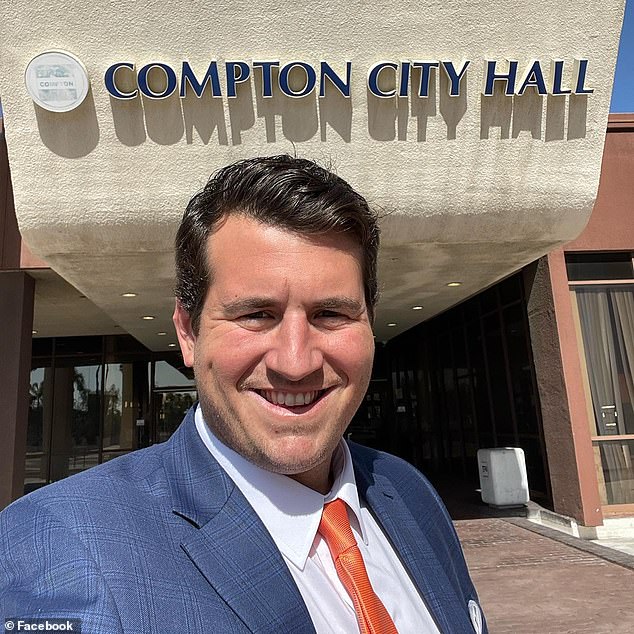 Far-right social media activist Alex Stein has form for ambushing politicians and harassing them while he films it, with Rep. Adam Kinzinger and Rep. Dan Crenshaw being two previous victims

‘Look how sexy she looks in that dress,’ Stein yells again as she reaches the top of the steps. ‘Whooo. I love it AOC. Hot hot hot like a tamale.’

‘I was actually walking over to deck him because if no one will protect us then I’ll do it myself,’ Ocasio-Cortez wrote of the incident on Twitter later, ‘but I needed to catch a vote more than a case today.’

The congresswoman first tweeted about the incident ‘deeply disgusting incident’ when she posted a picture of his face and slammed him for spewing ‘disgusting garbage in front of an officer who let him continue.’

But she then deleted the tweet, unwilling to provide a man who was ‘seeking extremist fame’ the attention.

‘It’s just a bummer to work in an institution that openly allowed this, but talking about it only invites more,’ she added. ‘Just really sad.’ 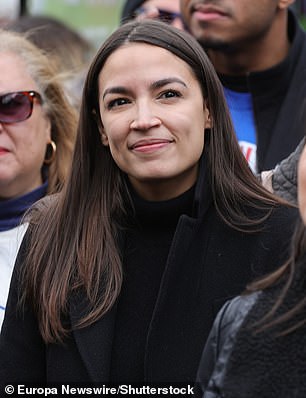 Instead she re-posted Stein’s video of the incident.

When reached for comment, Stein told Business Insider he would ‘love to date’ Ocasio-Cortez and thought she was ‘absolutely beautiful.’

When asked about the lawmaker’s remark on finding the incident ‘deeply disgusting,’ Stein responded that he is ‘actually very hygienic.’

He achieved some level of fame for himself by rapping about ‘putting a bullet in Putin’s brain’ during a Texas city council meeting in March.

Ocasio-Cortez was not the only politician Stein harassed on the Capitol steps on Wednesday. He posted a video of himself calling Rep. Adam Kinzinger a ‘fake RINO Republican’ and a ‘scumbag’ among other insults.

He was also involved in a confrontation with Rep. Dan Crenshaw at a GOP convention in Texas in June, calling him a ‘globalist RINO’ and ‘eyepatch McCain’.

‘This is what happens when angry little boys like [Alex Stein] don’t grow up and can’t get girlfriends…,’ the congressman tweeted in reply.