Amazon’s “Just Walk Out” Technology Coming to Whole Foods in 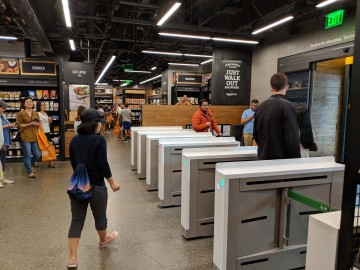 Amazon Go technology was first launched in Seattle in 2018

Amazon is expanding its smart shopping carts to a Whole Foods store in Massachusetts, the company announced on Monday.

GoLocal first reported about the business strategy and technology called AmazonGo in 2018.

Amazon will initially roll out the supermarket technology called Dash Carts at Whole Foods in Westford, Massachusetts, this year.

And the company says it will be expanding the technology to other Whole Food locations.

The carts build on Amazon’s “Just Walk Out” cashier-less technology. They use a combination of computer vision and sensors to identify items as they’re placed in bags inside the cart.

Dilip Kumar, Amazon’s vice president of physical retail and technology, in Monday’s blog post said the technology has been improved:

– The new carts weigh less than the original version but have more than double the capacity of the previous carts, holding four grocery bags instead of two

– The Dash Cart screen will now display images of fresh items nearby, like produce, for shoppers to choose from, or shoppers can type in the item name (“tomato,” for example) instead of a four-digit PLU code

– The carts feature an extended all-day battery life that requires less charging, making them even more readily available for customers

How It Works and How You Pay

“To use the new version of the Dash Cart, shoppers log in through a QR code in the Amazon or Whole Foods Market app, which allows them to easily sign in and begin using the cart. From there, shoppers place their bags (if using them) in the cart and start shopping, scanning their items using one of the cameras near the handlebar of the Dash Cart. The cart uses a combination of computer vision algorithms and sensor fusion to help verify each item placed in—and removed from—the cart,” said Kumar

“The Dash Cart’s screen shows a real-time receipt of all items in the cart, and when shoppers are ready to check out, they simply exit the store through the Amazon Dash Cart lane and their payment is processed using the credit card associated with their Amazon account. Shoppers will receive an emailed receipt shortly after leaving the store,” he added.

To pay, Kumar said, “You need an Amazon or Whole Foods Market account and mobile app to log in to use Dash Carts. You do not need a Prime account.”

Amazon today is building a major warehousing facility in Johnston. GoLocal broke the story in January of 2021.

The nearly 4-million-square-foot facility will be located off of Route 6 near I-295. The town is offering the online retail giant a 20-year tax break to build the facility. And, the facility has promised to employ 1,500 workers. Jobs are now being advertised now by Amazon. 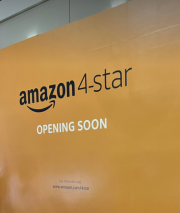 In November of 2021, Amazon was set to open a brick-and-mortar store at Providence Place Mall. The space was selected and the hiring process began.

However, by March 2022, Amazon announced it would be closing all of its brick-and-mortar bookstores, as well as its 4-star shops and pop-up locations.